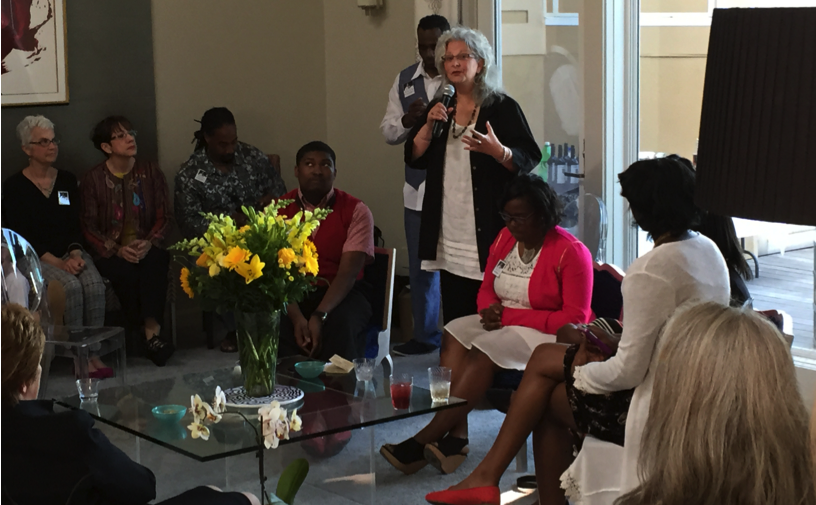 Executive Director, Victoria Christgau speaking at the CTCN fundraiser at the home of Jane Lehman and Matthew Winter.

Dr. Pasquerella shared how she became captivated by Kingian Nonviolence certification training over a decade ago. At the time she was Vice Provost of Academic Affairs and Dean of the Graduate School at the University of Rhodes Island, where civil rights leader Dr. Bernard LaFayette, Jr., former strategist for Dr. Martin Luther King, Jr. and leading world authority on the discipline of Kingian Nonviolence, founded and directed the Center for Nonviolence & Peace Studies at URI. Observing the passion and commitment of Dr. LaFayette, Jr. and his trainers, Dr. Pasquerella became a huge supporter of the Kingian Nonviolence certification trainings at the Center. It was at one of the trainings Dr. Pasquerella met Victoria Christgau, Executive Director of the Connecticut Center for Nonviolence. From the beginning Dr. Pasquerella recognized Christgau’s dedication and vision, and became an advocate for CTCN.

Other speakers at the fundraising event were the ThinKING youth trainers from Hartford. These high school students shared how their training provided a comprehensive understanding of Dr. King’s philosophy and methodology, offering them an array of effective tools to address social and racial justice through nonviolence.

Diane Jones, certified trainer and Vice President CTCN Board of Directors, told the crowd how the Kingian Nonviolence trainings are addressing the root causes of violence in Hartford and New Haven improving conditions in some of the most vulnerable communities affected by violence in Connecticut.

The ripple effects of Dr. King’s Principles of Nonviolence can be felt from the “suites to the streets and from the woods to the hood,” said Victoria Christgau, Executive Director of CTCN. Following her talk, she led everyone in one of the freedom songs.

“Music,” she informed the crowd, “was the blood that ran through the body of movement.” All joined in singing; spirits were high.

Keep up with the latest.

Get news and event updates delivered right to your email

Take a stand for justice. The Beloved Community needs you.